On Friday, October 27, the LSE Foundation hosted an alumni event in New York City welcoming the new LSE Director Minouche Shafik.  The program included a panel discussion comparing and contrasting the cities of New York and London and also a lively conversation between Shafik and Lord Mervyn King, a former Governor of the Bank and England and a current LSE professor. 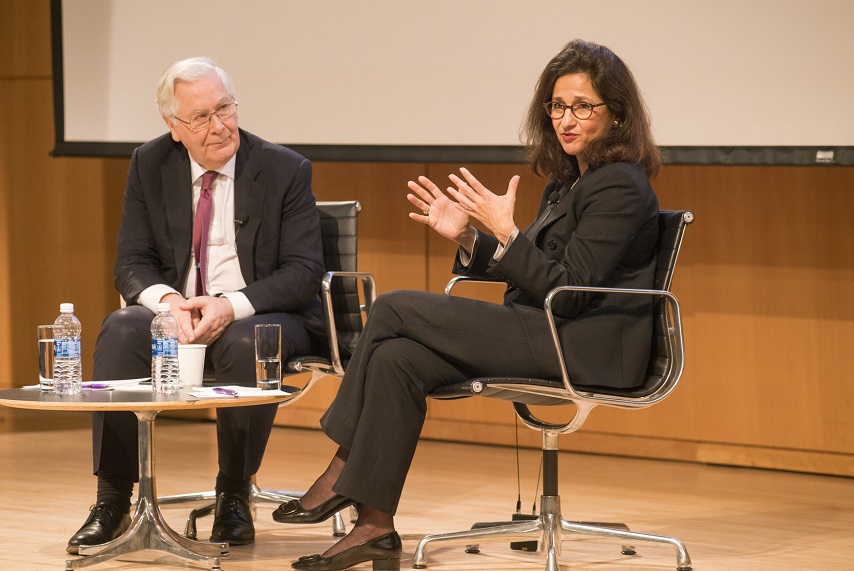 Alumni were welcomed by John Casey, the President of the AFLSE, and Shafik.  The panel discussion was chaired by Michael Kimmelman, architecture critic of the New York Times, and included Ricky Burdett, Director of LSE Cities, Tony Travers, Director of the LSE Institute of Public Affairs and Marisa Lago, Chair of the New York City Planning Commission.  The discussion touched on many things including population densities, housing challenges, access to jobs and transportation systems.

In the second part of the program, King interviewed Shafik in a lively discussion about her background and her plans for leading the LSE.  Shafik then answered questions from alumni.  Topics included the School’s expansion in the Lincoln’s Inn Fields area, contributions the School can make in the modern world, maintaining diversity at LSE, helping alumni with career planning and including new technologies in teaching.