You are cordially invited to a book talk and reception in honor of David Stevenson, Professor of International History:

Registration: Kindly RSVP here now for tickets During the evening, Professor Stevenson will discuss his work at LSE, including his latest book, With Our Backs to the Wall: Victory and Defeat in 1918.  There will also be an update on the School.

About Professor Stevenson Professor Stevenson's main fields of interests lie in international relations in Europe during the nineteenth and twentieth centuries; origins, course, and impact of the First World War. His publications include 1914-1918: the History of the First World War (Penguin Press, 2004) also published by Basic Books (New York) as Cataclysm: the First World War as Political Tragedy; by Rizzoli (Milan) as La Grande Guerra: una Storia Globale, and by Patmos (Düsseldorf) as Der Grosse Krieg. He has also written Armaments and the Coming of War: Europe, 1904-1914 (Oxford University Press, 1996); The First World War and International Politics (Oxford University Press, 1988); and French War Aims against Germany, 1914-1919 (Oxford University Press, 1982. Professor Stevenson studied for his undergraduate degree at the University of Cambridge, where he also studied for his PhD. He joined the LSE as a Lecturer in 1982 and became a Professor in 1998. He has twice been Chair of the International History Department, and is currently Vice-Chair of the LSE Appointments Committee (chairing faculty search committees) and a School Governor. His latest book, With Our Backs to the Wall: Victory and Defeat in 1918 (2011), is published by Penguin Books in Britain and by Harvard University Press in the USA.

Following a sellout run in London, he’s bringing his Dandelion Mind show to the House of Blues on September 18th.  AFLSE has a handful of free tickets available.

About Bill Bailey Classically trained musician Bill Bailey performed with various bands during his early career, often feeling an urge to slip jokes into the performance. It wasn’t until the late eighties that he was inspired to finally fuse his music with jokes and theatricality and become a stand-up comedian. 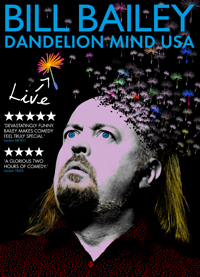 Bill won the British Comedy Award for Best Live Stand Up in 1999. In the Spring of 2002, having successfully toured the UK, he took his show Bewilderness to New York for an eight week sell out run at the WestBeth Theater Center, where The New York Times wrote of him, “Bill is an unalloyed pleasure, a treat for the funny bone, the brain and the ear”, and “Bill Bailey is not an ordinary comic…he will lift your spirits”. The Village Voice described Bill’s humour as “…articulate low key wit” and The Telegraph (UK press) pronounced him “a hobbit with a wicked sense of humour.” Bill was invited back to the USA at the end of 2002, where he performed the show for a nine week run at the 47th Street Theater, New York and appeared on The Conan O’Brien Christmas Special.

After touring successfully with his shows Part Troll, Tinselworm, Bill Bailey’s Remarkable Guide to the Orchestra, and Bill Bailey: Live, Bill created Dandelion Mind, which he performed for an extended run of ten weeks at London’s Wyndham’s Theatre.

Aside from touring, Bill has performed at the Edinburgh Festival almost every year since his Cosmic Jam debut and has also appeared in plays on the Fringe; firstly in an extremely well-received production of 12 Angry Men, then as the slouchy, unkempt Oscar in the equally acclaimed The Odd Couple. Bill’s British television portfolio is also extensive, most notably connected with the long running music / comedy panel show, Never Mind The Buzzcocks (BBC2) and hit comedy Black Books (C4).

Most recently, Bill returned to the US for a special performance at the Bonnaroo Music Festival, then headlined UK’s premier metal festival Sonisphere in July 2011. He shared headline billing with Metallica, Slayer, Megadeth, Anthrax and Motorhead, marking the biggest ever outdoor comedy performance at a rock festival in the UK. Bill will follow up this appearance with a string of dates of his critically acclaimed “Dandelion Mind” one-man show in September at New York’s Skirball Center for the Performing Arts.

For questions or if you would like to become involved in helping to plan Chicago events, please email Margo Rocklin at: Chicago@aflse.org

Don't forget that the AFLSE website, www.aflse.org, has a wealth of information about upcoming events, networking opportunities for AFLSE members, member discounts, and news of LSE.