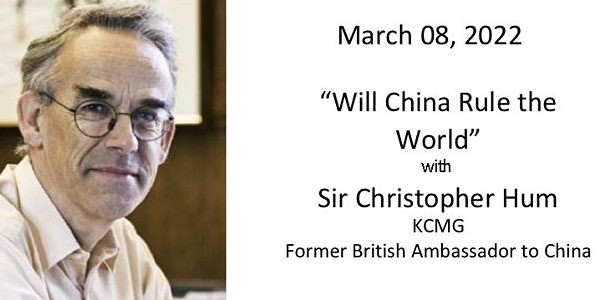 On March 8, 2022 Sir Christopher Hum, British Ambassador to China 2002 and 2005 will speak at the Denver Country Club at 12:00P.  This luncheon appearance is sponsored by the Denver Branch of the English Speaking Union in partnership with the Denver Council on Foreign Relations.

Attending this event at this location is your choice.  While research shows that vaccination is highly effective against Covid-19, the CDC still recommends that those who are fully inoculated wear a mask in public indoor settings in areas of substantial or high transmission levels.  Please do not attend an event if you have a fever or feel unwell, or if you have tested positive for Covid-19 or have been exposed to someone with Covid-19.

Christopher Hum has been observing developments in China for over forty years: he lived there for ten years as a diplomat and was British Ambassador to China between 2002 and 2005.  On his first visit to China, during the tumult of the Cultural Revolution, Christopher Hum watched Chairman Mao receive the adoration of Red Guards. He lived there in all for ten years, as a diplomat and as British Ambassador between 2002 and 2005, and saw its transformation into the superpower it is today. In his lecture he gives a first-hand account of China's rise and asks whether today's resurgent China is a threat or an opportunity for the world.

Christopher Hum joined Her Majesty's Diplomatic Service in 1967 and much of his diplomatic career was connected with China. He studied Chinese at Hong Kong University and went on to spend a total of eight years in postings to the British Embassy in Beijing, culminating in four years as British Ambassador (2002-2005). He also served in the Asian departments of the Foreign and Commonwealth Office, and for several years was closely involved in the negotiations on the return of Hong Kong to China. Other overseas postings included Brussels (European Communities), Paris, the United Nations in New York and Warsaw (as Ambassador, 1996-1998).Between 2006 and 2012 Christopher Hum was Master of Gonville and Caius College Cambridge, where he remains as a Life Fellow. He is a commentor on China in the media and has just completed a post- graduate degree in East Asian art the School of Oriental and African Studies, London University.