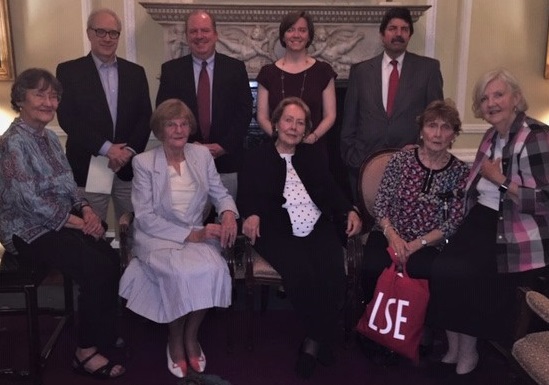 Greetings to all LSE Alumni in the US and Worldwide,

This year is the 50th Anniversary of the Alumni and Friends of the London School of Economics in the United States, otherwise known as the AFLSE!  We hoped to celebrate our success with a gala event but those plans have been put on hold. In the meantime we’re working on virtual celebratory events, including a lecture by Princeton Professor G. John Ikenberry on October 8th. The AFLSE has a lot to be proud of over the years and we thought we’d share some of those milestones.

The AFLSE is the School’s oldest and largest alumni group outside the United Kingdom. In the 50 years since its inception, the AFLSE has supported the LSE and its alumni through numerous alumni programs and fundraising campaigns. These services have been provided by a dedicated and hard-working group of volunteers nationwide, many of whom have served the School for decades. There are currently 22,000 active LSE alumni in the US supported by 39 local chapters, regional representatives and special interest groups hosting over 200 alumni events every year.

The AFLSE was founded in 1970 as a 501(c)(3) US tax exempt organization in order to assist the School with its first US fundraising campaign to expand the School’s library.  The campaign culminated with the opening of the Lionel Robbins Building on 27 July 1978.  Over the years the AFLSE actively participated in other capital campaigns including the development of student housing at Butlers Wharf. The AFLSE was an active fundraising vehicle for academic scholarships as well, awarding full scholarship grants to nearly 150 students over five decades.  These enthusiastic fundraising efforts were matched by the AFLSE volunteers’ devotion to the difficult task of picking scholarship winners from scores of deserving applicants. More recently the AFLSE has encouraged alumni to give to the School by meeting a Challenge Grant target for increasing the number of donors to the Annual Fund in 2009.

In the very early days, the AFLSE began assisting the School with US alumni affairs by hosting annual dinners, publishing newsletters, etc. with the national organization based in Washington, D.C.  The AFLSE soon established a nationwide system of local chapters whose activities included arranging for alumni meetings with visiting faculty, supporting prospective students, and professional development opportunities for graduates. The AFLSE established an office and eventually launched a website that among other things helped the LSE stay connected with US alumni. The AFLSE had continuous communication with the Director and the alumni staff on US alumni affairs. These activities were performed by volunteers with associated costs funded by membership dues.

The AFLSE offers a collection of alumni services and benefits in conjunction with the School. We host numerous social, educational and professional events across the country. We have enthusiastic chapter leaders and regional representatives across the country along with thirty passionate Board members to guide us. The AFLSE has recently partnered with the LSE Office in New York for greater coordination of our common goal, to support the LSE and its students and alumni.

We’d like to recognize the former AFLSE Presidents and thank them for their leadership and dedication. Without them we wouldn’t be here. You may notice on the list the late US Senator from New York, Daniel Patrick Moynihan. As Sen. Moynihan was often busy on Capitol Hill, Elizabeth Smith Brownstein served as Executive Vice President to assist when he was unavailable.

Thank you for being part of the LSE community, we hope to see you all at a future AFLSE event!

the LSE in the USA