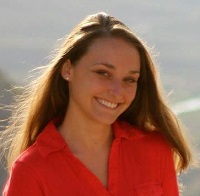 The AFLSE Scholarship for 2016-2017, covering tuition costs for a year of graduate study at the LSE, has been awarded to Kirsten Raschko.

Kirsten attended the University of California, Los Angeles (UCLA), and after receiving her BA in English in 2011, she became an AmeriCorps VISTA volunteer in Austin, Texas, deepening her understanding of non-profit work. This, combined with her grandfather’s experiences during World War II, inspired Kirsten to work with refugees at the International Rescue Committee (IRC). After working as a refugee case worker, she developed and coordinated an anti-human trafficking program, offering all-encompassing services to victims of human trafficking.

Having worked with forced migrants from developing countries in the U.S., Kirsten wanted to gain first-hand experience in a developing country, and accepted a Fulbright ETA Fellowship in Turkey. Here, Kirsten currently teaches English at a university, and acts as the Outreach Coordinator and Data Director for Paper Airplanes Tutoring, an organization that connects Syrian refugees preparing for Turkish university entrance exams to English tutors who can assist them in achieving their goals.

Kirsten’s long-term career objectives are to aid survivors of conflict by creating sustainable programs in developing countries. Completing the MSc in International Development and Humanitarian Emergencies at LSE will provide her with the essential theory and background knowledge required to be successful in this endeavor. Additionally, the LSE will offer innumerable opportunities and experiences for her to grow as a scholar and as an individual.

Kirsten Raschko was raised by her mother and immigrant grandparents in Napa, California. Her grandmother immigrated from Sweden and grandfather from Denmark in the 1950’s. Her grandfather played an active role assisting Jewish refugees fleeing occupied Denmark, and his experiences greatly influenced Kirsten’s career ambitions.

Kirsten is incredibly grateful to receive the AFLSE scholarship for the 2016-2017 academic year, and is looking forward to participating in AFLSE in the future.